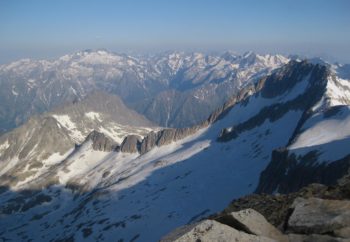 Posets-Maladeta Natural Park is a protected natural space found in the north of La Ribagorza county and the north-east of Sobrarbe county. Within its boundaries are the two highest massifs of the Pyrenees: Posets, also known as Llardana, and Maladeta.

Occupying over 70% of the park’s total surface area (33,440 ha) higher than 1,800 metres above sea level, the focal point of activity in this natural space revolves around its high-mountain landscapes and glacial formations (valleys, mountain lakes, arêtes, etc.).

Some of the biggest glaciers found in the Pyrenees, such as Aneto Glacier, are right here in this park. Meanwhile, these persistent bodies of ice make up what are known as the Natural Monument of the Pyrenean Glaciers.

The park is home to a greatly diverse fauna and flora. Its altitudinal and lithological variations mean that a range of ecosystems can be found there, including everything from river habitats at the bottoms of the valleys to icy environments in the high mountains, without forgetting to mention mountain forests, bogs, lakes and rocks.

The richness of the nature found in the park is perfectly complemented by the sustainable use made of the mountains and the surrounding area by the inhabitants of the municipalities of San Juan de Plan, Gistaín, Sahún, Benasque and Montanuy. This harmony between nature and the traditional mountain economy has helped create landscapes such as the estivas ganaderas (high pasture areas), thepletas (farmers’ cabins), the fields of crops and the huts, in addition to mountain passes, traditional passing places where old hospitals, such as the one in Benasque, can still be found.

Aneto within the natural park

Aneto, the highest point of the Pyrenees and the watchtower that looks over the entire park, is both a symbol and a challenge for all mountaineers who come to the natural park to conquer its 3,404 metres. The most commonly climbed routes are the ones that go up its north face,starting inLa Besurta, and the one up its south face, starting atPuente de Coronas in Vallibierna.